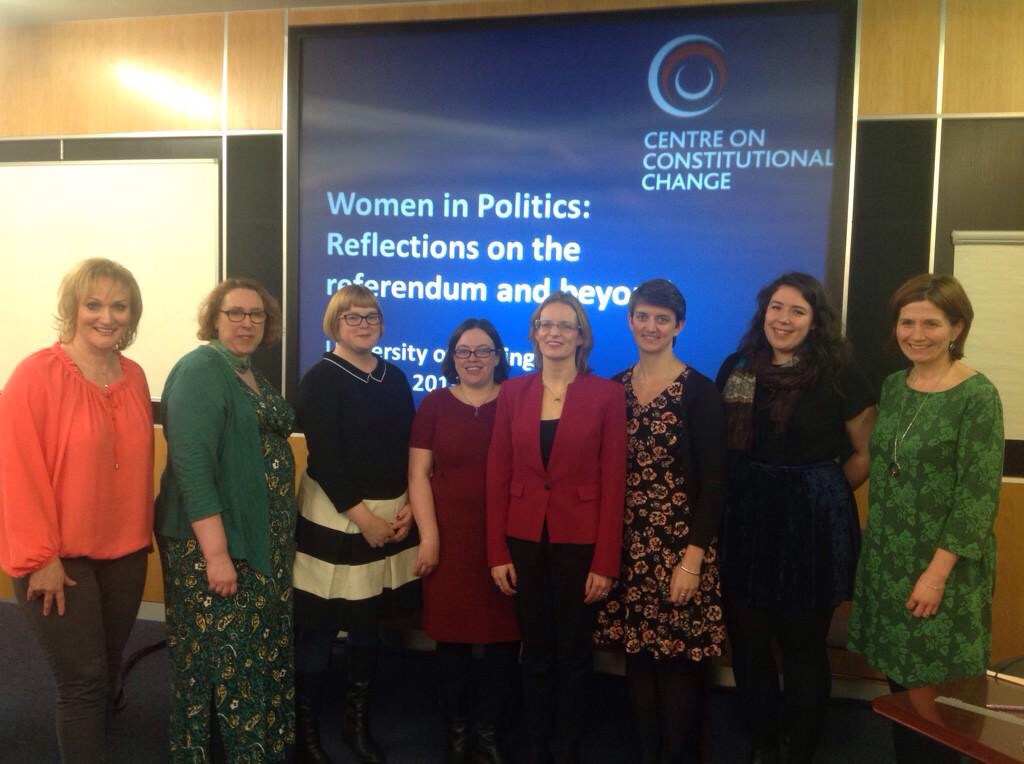 Women in Politics: reflections on the referendum and beyond

On 4th March, I was privileged to be a member of the panel at the Centre on Constitutional Change’s discussion event at Stirling University on Women in Politics. The focus of discussions was about how to maintain and build on the increased engagement in politics, especially by women, during the referendum period. This is more or less what I said in my introductory remarks, and some further thoughts following what was an inspiring and energising evening.

Good evening everyone, and thank you very much for inviting me to participate in tonight’s discussion – I very much look forward to hearing from you all about your experiences and challenges in politics, and perhaps especially how we can enhance the scope for women to get more involved. I am Maggie Chapman, co-convener of the Scottish Green Party, local councillor in Edinburgh, and Rector of the University of Aberdeen. So that makes me part of the 24% of female councillors in Scotland, and also one of the very few women who chairs a public institution.

I was first elected as a councillor nearly 8 years ago, and this only happened because of the gender balancing mechanisms we have in the Party, but I won’t dwell on that just now. I would like to share a little snippet of one of my earliest experiences as a councillor. As new councillors, we had various training sessions and one of these happened at Murrayfield Stadium; all very swish. At the end of the day, three of us newbies hopped on to a bus to head back into town: two men, and me. We got chatting about our involvement in politics, why we were there, and so on. One of the men said words to the effect of “women shouldn’t be in politics; they should be pregnant, barefoot and in the kitchen”. In 2007. Pretty incredible for the 21st century, I think.

Incidentally, the same councillor (who is still on Edinburgh Council) a year or two later, accused me, in the council chamber, of being ideological. Quite astonishing, and quite a start to my elected career.

Since 2007, one of my key priorities has been to work hard to make politics more participatory; participation in politics is the lifeblood of a socially just society. We see around us, on a daily basis, the alienating effects of neoliberalism: it works to undermine people’s democracy and replace it with market democracy, moving us from one person one vote to one pound (or perhaps more accurately, one million pounds) one vote. This is not democracy.

Five years ago, with the support and tireless energy of a female council officer, I managed to pilot a participatory budgeting process, £eith Decides, in Leith. This gave local people the power to decide what community projects got council funding. I faced opposition to this from various people, including fellow councillors, as they thought that local people would make the wrong decisions, and it would obviously result in the usual loud mouths taking all the resources for themselves. But this is clearly not what happened. Leithers of all ages take part, engaging with each other in quite incredible ways. We’ve had over 1000 people at the last three events, and it is now a permanent fixture in our annual programme of community events.

The referendum has shown us that there is a huge appetite for genuine politics – if people think their vote makes a difference, they will take and interest and get invovled. Exactly as we have seen happen with £eith Decides.

In the Referendum, I think, key to getting more people involved, especially women, was the community-based campaigning, the local focus of activities; at least that was my experience on the Yes side. It was not dominated by the yah-boo, and often very chauvinist attitudes of the stale, grey and male politics we see in Westminster, and it wasn’t about tearing strips off each other as we see in debating chambers across Scotland. It was ordinary people talking about what mattered to them in their day to day lives; important things like jobs, childcare, social security.

We need to harness the renewed interest in politics by giving power back to people, through more participatory budgeting, real local democracy and through serious engagement in the political process, and women have to be supported and encouraged in this.

We can see the success of this already with politicians being pushed around (quite rightly) by the electorate on issues like fracking, TTIP, and, dare I say it, Corporation Tax cuts. This must only be the start, and we all have a role to play.

During the group discussions and Q&A session, several things stood out for me.

Firstly, as a woman in politics, I have a clear responsibility to support and encourage other women, perhaps especially younger ones, to come forward and get involved.

I firmly believe that we also need to think about politics differently: it is not just about putting an X or a 1, 2 or 3 in a box every 4 or 5 years. This is not politics, and it is certainly not democracy! Politics must be recognised in communities, in work places, in every aspect of our lives. I don’t want 129 people in Holyrood deciding everything for me. Power must be devolved to local people.

Lastly (for now) it is clear to me that I need to be better at challenging sexism and gender discrimination, wherever it arises. It is perhaps easier to challenge men on this, but as women, we are often our own worst enemies, and I stated clearly my intention to challenge my sisters (I think I said I promised to fight more with women – in a good way!) when I feel they are undermining other women, or making it more difficult for women to engage and participate in politics.

0 comments on “Women in Politics: reflections on the referendum and beyond”