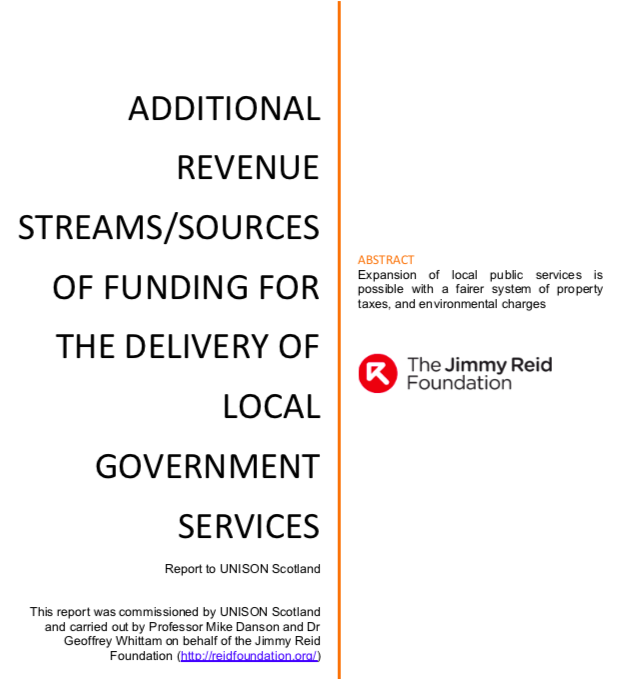 We must build public support for reform of local government finances

Yesterday, I spoke at the launch of the Reid Foundation's report on financing local government at the STUC Annual Congress in Dundee. Mike Danson (co-author of the report), Lilian Macer (UNISON Scotland convenor), David Ross (Fife Council Co-Leader) and I discussed what we needed to do to ensure our public services are properly resourced. This is what I said as my introductory remarks.

Good afternoon everyone, and thank you very much for inviting me to contribute to the discussion today. And can I thank Mike and Geoff for their report - it’s great to have such a clear overview of what needs to change, and how we can begin to think about that change. I could keep my remarks very brief and just say that “I agree with Mike”, but I’m not going to.

And that’s because I see what has happened to local government finance as part of a broader picture of local government being denied power, being stripped of power. We have needed to give local authorities more power over a range of things for years now. So this report is welcome because it identifies some of the ways forward in finance and services.

Before I turn to comment on elements of the report itself, I want to make what for me is a fundamental point in how we think about this issue.

Many of the services provided by local government are those that do most to prevent future need arising. They are things that underpin our quality of life and well-being. They are not always acute services, and they do not attract the level of support (either financial or societal) that the NHS does. But they are incredibly important. When we look at what has happened in London with the almost complete removal of youth work services provided by local authorities, it is hard not to conclude that this has contributed to the rise in knife crime.

We need to support these services, which might be seen by some as boring or irrelevant, but I know - we know - to be very important. It is appropriate that, given we are here at STUC Congress, that we remember the Christie Commission (Campbell Christie being a former STUC General Secretary), and its findings should still drive our approach.

So I think it is really important that we begin to build public support for these services and the ways they are funded. I look at the way the Republic of Ireland has used citizens assemblies to create public consensus around incredibly divisive issues such as abortion and equal marriage. How could we use such approaches to improve public understanding around the links between cutting expenditure and cuts in services? The days where people made the case that the public sector could “make efficiencies”, or that all government spending was “waste” are, I'm glad to say, over. But we still do not have a public acceptance of the alternatives to these things.

And it should sit under a proper fiscal framework that sets out the relationship between central and local government on a statutory footing.

The report discusses public ownership of municipal utility and transport companies. This is a no-brainer. They pay for themselves and provide better services, as anyone who has used the buses in Edinburgh where they are municipally owned and Glasgow, where they are private, will attest.

One area that seems entirely sensible and that would enjoy wide public support would be a buyback of PFI/PPP and LOBO (Lender Option, Borrower Option) debt (p. 10 of the report). If public debt really were the issue that the 2010 Tory-lead government claimed it was, it would have renegotiated PFI/ PPP debt which was obviously on unfair terms for the public. The Edinburgh Royal Infirmary is a spectacularly bad deal for the public and should have been bought out saving the public billions.

Similarly, when PPP schools in Edinburgh started falling down I argued that it was appropriate to halt repayments on the basis that the contract had obviously not been fulfilled by the operators. The report’s call for more staff who can understand complex financial mechanisms in this report may also help to unravel some of these obfuscatory contracts.

The Scottish Government should seek ways to buy out this debt as soon as possible so that the burden on public authorities can be lifted. Given that some schemes are at well over 10% yield per annum, the return from renegotiation would be massive.

We all know that the council tax is a terrible tax, but it is set in such a way that makes changing it very difficult. The impact of any change will create a small number of very easily communicated losers. You'll maybe remember Jack McConnell ruling out the Burt Review proposals out of hand because it would mean some houses in Edinburgh paying £4000 in a property value related local tax.

I'd like to point out though, that Greens have made reform of council tax a priority, so the report is not quite right to tar “all parties” with the brush of ‘not being keen on reform’.

There are similar boundary effects from a local income tax, which, on the Burt figures would mean two low-medium income workers living in a 1 bedroom flat paying 6.7% of their earnings. That would have meant a bill of £2680, up from a Band A council tax at the time of around £900. Young couples struggling to get into the housing market could just not afford this. If you're wondering why parties that supported LIT in the mid-2000s are much more shy about it now, that's why.

Similarly we need to find taxes that reflect the new economy. The replacement of much retail by online sales needs a new approach to taxation. And at the moment the government subsidy going to large online retailers to have large un-unionised warehouses, with terrible working conditions, is pointing in exactly the wrong direction.

Again this will need us to build public support, as attempts to regulate Uber in London have shown. There was public support for regulatory changes, but also a significant kick back. Because these services are popular, and relied upon, by many.

The preventative services provided by local authorities are far too important to be treated as the Cinderella they have been over the past 10-20 years. While the situation in England is much worse, we must not allow a similar situation to develop in Scotland. The groundbreaking work done by Campbell Christie and his colleagues and this report point us to some of the ways we can ensure this does not happen.

And I make a plea for a more participatory, deliberative approach - I think we can build support for changes in public policy to deliver a better future. We need it to do this as a matter of priority. And I’d urge Unions to work much more closely with communities to bring people on board with an investment strategy in people and communities that can move us on from the era of cuts, and towards an era of building a better society.