It was a great privilege to be the opening speaker at this year’s Radical Independence Conference.  This is my speech:

“Welcome to the real face of the Radical Independence Conference. It’s a great honour to be able to speak here, and to be able to open this conference. And a huge thank you to Johnny Shafi and all those who have made today happen.

This is the conference of a revolutionary movement.  A movement that can transform Scotland. We can create a Scotland that is more just, that is fairer and that creates a new economy and a new society.

We all know the failings of the British state:

This moment in Scotland’s story is vital. We have the opportunity to reverse the corporate capture of our state and the intrusion of the market into every aspect of our lives.

Over the last year we have driven the debate to the side of humanity. Rather than trumpeting lower corporation tax as a central reason for independence, the debate has shifted to universal childcare.

Instead of arguing for a deregulated neo-liberal state, the Yes campaign is opposing the bedroom tax.

We have put the issue of a Scottish currency on the table and I am convinced this is an argument we can, and must, win.

And, importantly, we, as RIC, have shown that there are people beyond the SNP who want independence. Greens, socialists, non-party members – we must all contribute to developing this radical vision for independence.

We must keep this progress up.

We must campaign not just to defend the social security system we all value so much. We must fight for social security that does not divide people. We must have a system that provides for all. When Nicola Sturgeon calls for an end to the attack on social security, she is right. But an independent Scotland must go further. We should value every citizen and ensure a citizen’s income, a basic income for all.

We must, and do, think radically about the way we organise, and the way society operates. For too long global corporations have profiteered through the flogging off of our public services. We must rebuild faith in public and community ownership of our services.

We should all be proud of the fact that Holyrood defended our NHS from Westminster privatisation. We should be delighted that the SNP have promised to renationalise the Royal Mail. But an independent Scotland must go further. For our country will only be run by the people, for the people, if the major economic decisions are made by the people, for the people. So, we need worker control, community ownership, participatory budgeting, and a new commitment to local democracy.

We need to allow workers to buy their workplaces. A government investment fund to support buy outs would have transformed the Grangemouth dispute. With the right to purchase the business and the funds to back that we could have had a very different outcome.

We must ensure that our public utilities are governed democratically. This will not only end the greed culture that has impoverished so many. It will make further sell-offs impossible.

So what is to be done?

The Radical Independence movement is a great start. We’ve already shaped the debate. But we need to make an even bigger difference over the next year. And referendum day cannot be where we stop.

We showed the world that Scotland rejects UKIP’s racism and bigotry. I salute those who drove Nigel Farage out of Edinburgh. We must continue to fight fascism wherever we find it.

The lessons of Scandinavia have been well aired. But we must learn the lessons of Latin America where practical action has rolled back neo-liberalism and elite rule. We need to take control of our assets. Of renewable energy; of our currency; of our communities. And we need to run those assets in a democratic way.

Today will explore many of the ways we can do this. I’m excited by the potential for the Radical Independence campaign over these coming years. And I’m excited about creating a radical Scotland.” 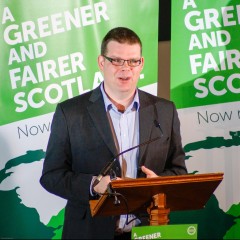 View all posts by Peter McColl
Skip back to main navigation