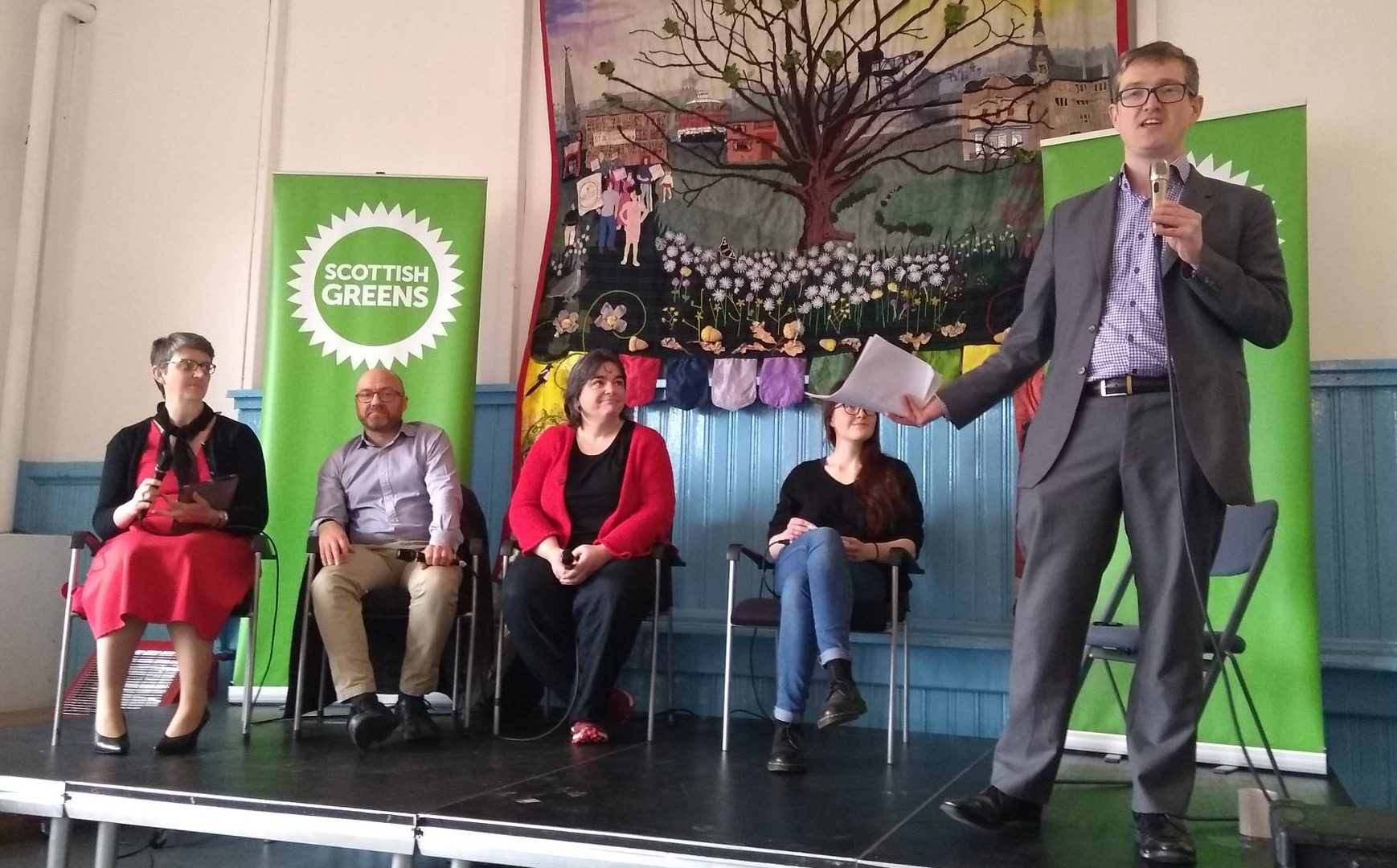 Last Friday, 29th March, on what would have been Brexit Day, Greens gathered in Glasgow to show solidarity with EU citizens and discuss how we can avoid Brexit. I spoke on a panel with Glasgow Greens Patrick Harvie and Jon Molyneux, and two EU citizens, Michele Gordon and Heloise Le Moal. This is what I said.

Who would have thought that, with such a strong and stable government in Westminster, we would be in the situation we are in today: Brexit day, but we’re not leaving. Brexit has entered the vocabulary in a broader sense - as a verb that means “to say you are leaving, but then fail to do so”. That there are now cats named Brexit might well be Theresa May’s most positive legacy.

Today is Brexit day, and while the date has changed the Brexit position hasn’t.

And much as I’d like us to be embarking on a referendum to keep us in the EU, we’re not yet. So, as important as that referendum is, we need to be doing the things we can - the things that are in our power. And most important is that we make the case for Europe. In 2016 David Cameron achieved a particularly difficult feat: he ran the worst campaign many of us have ever seen. It had all the negativity and cynicism of the No campaign in Scotland in 2014. But he didn’t even win the European referendum.

The lesson is clear: we need to make a positive case for Europe. And we now have a receptive audience. Not just the people who marched in London and other places around the country last weekend. But the many, many people who’ve realised that Europe means something to them. We need to be critical - there must be no more Fortress Europe. There can be no repeat of the fiscal waterboarding of Greece. But now is the time to build a movement for a citizens Europe, not a Bosses Europe.

To do that we have to start with the causes of Brexit.

We’ve spent so much time talking about Brexit, we haven’t actually considered or thought much about the causes of Brexit. That’s important because, as we enter the twilight zone between the withdrawal date and any change of circumstances, so the expected benefits will come into focus. I think that whatever happens with Brexit risks deeper divisions amongst us on the left of politics. And it risks the further rise of the hard right.

The reason why the hard right wanted a Brexit referendum was precisely that it would unleash racist forces and divide the left. We must not fall for that tactic.

This is because Brexit can never solve the problems it was meant to address. There were two major drivers of the Brexit vote: opposition to austerity; and opposition to immigration and the presence of black, Asian and minority ethnic people in the UK.

But Brexit isn’t going to end austerity, and it isn’t going to make Britain white again. And no Brexit can be sufficiently Brexity for the Brexit enthusiasts. That makes any outcome of the Brexit process fertile territory for the hard right. And it's why they were so keen on the issue in the first place.

That’s why it’s important that if we do stop Brexit we do it through a democratic process -  a referendum - rather than bureaucratic or legal fixes. We need to build a popular case for Europe, and it’s best if we win that in a popular vote.

As the lead candidate in the 2014 European election for the Greens in Scotland, I put immigration at the heart of our campaign. We were the first to stand up on immigration and make the case that it was vital to our country. That we should have a just and welcoming Scotland. That was long before the EU referendum. In the Independence Referendum, Greens made the case for a radical, democratic Scotland. Our energy, positivity, and willingness to force a better world into being transformed those democratic events.

In the EU referendum, we were a rare voice of positivity. Making the case for a Europe transformed. We’ve been making that case since before Europe was a question. We must redouble our efforts now it is the focus of our politics.

And we must do this because I am very concerned that any failure to leave the EU will be a massive recruiting agent for the hard right. They will be able to make the case that democracy doesn’t work, so we should have authoritarianism instead. This is almost certainly what will happen if Brexit is stopped. We need more democracy, we need liberation. We must oppose authoritarianism.

But it’s also what will happen if we have a Brexit that doesn’t end austerity, or doesn’t end immigration, or doesn’t create a racially pure Britain. In other words, any actual kind of Brexit.

And everyone who understands politics or economics knows ending austerity will be more difficult outside the EU than inside the EU. There will be a substantial economic shock after Brexit, which will reduce tax revenues and increase unemployment.

We also know it is both impossible and totally wrong to end immigration or revert to the racial mix - or lack thereof - of the 1950s.

We need to focus on the causes of Brexit and the real solutions to those. We need to change how we make the case on austerity and we need to win the argument for immigration and anti-racism. And that campaign needs to start now.

There have been effective campaigns against austerity, but the lesson from the Brexit vote is that they need to be clearer about how austerity can be ended. We focused on the problems of austerity, rather than the ways we could end austerity. There’s good evidence that people believe that there is a limited amount of money which had to be allocated by Government. This is, of course, not true. But it makes arguments against the EU (and international aid) very attractive. It is a significant part of what made people believe the notorious ‘£350m a week for the NHS’ lie.

This is not just an expression of regret. We need to change how we do politics so we can avoid Brexit becoming a permanent recruiting agent for the far right.

There has not, on the other hand, been an effective mass campaign for immigration. And this is what we need to change. The first priority must be to make the moral and economic case for immigration. Immigrants have the right to be here – it’s not just Scotland that is a mongrel nation – and they make our economy and our public services function. We must be on the front foot about immigration and race. And this must go beyond EU immigration. We know that the racist attacks that followed the Brexit vote weren’t limited to EU migrants. And so any campaign for the EU needs to recognise the contours of the anti-immigrant arguments.

So, addressing the causes of Brexit must be a higher priority. We are at a very dangerous juncture in our politics, and we need to ensure that we speak to the concerns that led to the Brexit vote.

And there are signs of hope in the gloom.

Nobody now thinks that the UK, as it is, is OK. In the halcyon days of 2014 when we were all so carried along by the enthusiasm, energy, and vibrancy of the Independence movement, there were those - mainly no voters - who just couldn’t see a problem with Britain or the British state. People didn’t really understand the problems that we said independence could solve.

Well, it’s hard to understate just exactly how much that situation has changed. Nobody now thinks that it's UK:OK. And while some people did believe that we would be better together, well I think even they believe that ‘better’ is stretching credibility now.

And that’s where you all come in.

Regardless of what happens in the coming weeks with deals, no deals, cliffs, no cliffs … we’ve got our work cut out for us. And it is the work that we know how to do. It is the work that we are good at. It is the work of going out, into our communities, our schools, our workplaces, our pubs, our universities, our supermarkets, and talking to people about our green vision for Scotland. Whatever happens with the clusterfuck that is Brexit, we still need to do these things.

Because we know we have some of the solutions for a more equal, more open, more sustainable world. We have those messages of hope. And at a time when everything seems so unimaginably gloomy, hope is our strongest weapon. To borrow a phrase: let’s live as if we’re in the early days of a better Europe.